First steps into the western Outback

The north west of Australia belongs certainly to the most remote areas. Until the 20th century it was hardly discovered until mineral resources were found and the plunder began.
I wanted to avoid this area which is shaped by mining works so I left the road at Nanutarra Roadhouse in direction Tom Price. Goal of the tour war Karijini NP. In order to avoid a 50k detours I took the gravel road north west to Tom Price. To my surprise there were no Road Trains at all on the track.
Unfortunately I missed a turn out in the NP and realized it far too late so I certainly missed some nice experiences but didn’t get the load of dust in my face either.
On the road to the bush camp I’ve seen one of the mean venomous snakes – too late for the poor animal. What the hell is it doin’ on the road anyway?
The campground at Dale Gorge is just beautiful. Pretty simple. Earth closets only and no water supply at all. Don’t ask for a beer on tap…
After the long tour I went for a hike into the gorge. Good to move your feet again. After dark it was just an awesome clear night with countless stars.
The next day I headed for Marble Bar. Take the Great Northern Hwy north and you’re riding through an endless expense of nothing. Who’s ever been on the sea will remenber the feeling when you can see the horizon in every direction. That instills you a kind of respect. No place you shoukd run out of water or gas.
Only some road trains passing by frequently with a power that almost blows you off the road. These guys are in charge that the road should better be called Cadaver Hwy. I’ve never seen so many killed stock before at the side of the road, partly 5-6 at once, these guys just never stop. Imagine the smell. And I’m still thinking about ‘my’ snake yesterday… 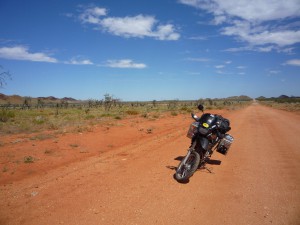 At km 130 turn right on a gravel road towards Woodstock and Marble Bar. Before you enter the town there’s a nice museum about gold mining an Gerard is more than happy to tell you all the stories about it. His knowledge about the area is amazing but he might be happy to see someone anyway. 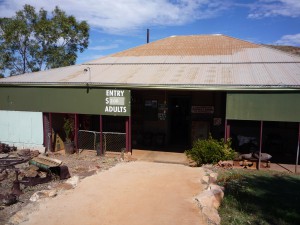 I was already looking forward on a shower, after I’ve filled up the bike. But somehow I didn’t want to stay in this town. It was just a feeling, but I decided to add another 250k to Pardoo Roadhouse. Dinner and beer were fine and more than welcome after this long tour.  And it was tasty anyway.
At night there’s a massive diesel generator 50m next to me, pouring water for the sheep farm. How happy I was that I still have the Daytona made earplugs.

Next day an easy ride along the Great Nothern Hwy passing the Great Sandy Desert to Broome. Back to civilization with all the convenience like telephone and internet access, even if they take a lot of money for that. 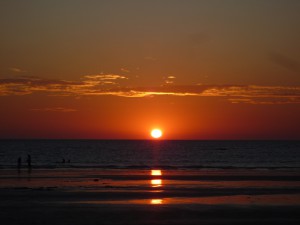 5 thoughts on “First steps into the western Outback”