Along the Coral coast to Exmouth

After quite a while without internet access I’m back 😉

This is the expected long distance trip to Exmouth along the costal side through the bush.
In total it took me 10hrs for the 700k and there was not much variety on the tour. At least I’ve seen an Emu for my first time, which was roaming around with it’ 5 chicks. Unfortunately they didn’t trust my ability to take good shots and disappeared before I could even take the camera.
During the lunch bread I visited the air space museum in Canarvon – all old stuff but the two guides did their job with passion so it was worthwhile a visit.

Soon before darkness I pitched up the tent – by 6p.m. it’s absolutely dark in winter.
A load of white kakadoos made a noise which would make AD/DC jealous ;-)) 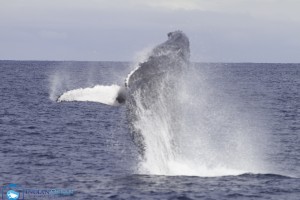 Close to Exmouth in Cape Range NP is the Nangaloo Reef and I booked in myself for a snorkel tour. As a Frisian I was the only one who didn’t want a wet suit. Water was 20+ degree anyway. But I guess I’m the only one of the company who has to deal with a mean sunburn now…

Awsome reef, plenty of colorful fish, starfish, a shark, two manta rays and a turtle were to be seen. The whale sharks were gone already.

The Cape Range NP is accessible approx. 100k and offers a number of beautiful lookouts. 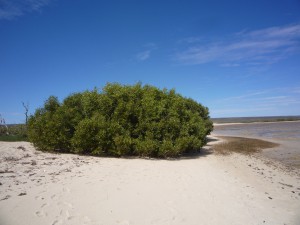 Local people told me, the reef here is even more beautiful than the Great Barrier Reef, because the sight is much better, it can be entered from the shore and there ain’t the loads of tourists who scare away the fish.
On our boat were 20 PAX and there was only one more on its way.

PS: The Whale and Ray photos were taken by the boat company’s photographer. Cheers that I may use them.

4 thoughts on “Along the Coral coast to Exmouth”