Hi there – that’s me

Since year 1969 I try to explore my surroundings. First, the park in our neighbourhood, than in more extended areas. Now it’s the turn for Australia.

I grew up in the tranquil Friesland in the north of Germany, in a village called Schortens

After school I moved to Berlin and got stuck there. Meanwhile I really enjoy living there.

But from time to time I have to hit the road. The bike has to be set up, the latest The Alarm-CDs have to be transfered on the i-Pod and on to somewhere. 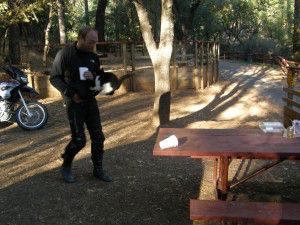 During the last decade quite a lot kilometers were collected. An extraordinary experience was my first year off, when I rode with my then partner cross country North America. And it was HER idea to do that. I’d never figured out that a thing like this is possible. My thanks are always yours!!

If I don’t ride the bike ‘cross somewhere, I’ll teach at a secondary school and I really love it.

You think it’s hard stuff? No, it’s not. And I’m a supporter of SV Werder Bremen and had to go through tougher times…

In my leisure time I like to go to concerts. Punk at first but also some classics like the Stones, Neil Young or The Who (meanwhile almost the same).

Every few years it’s time for a sabbatical. That’s where I am right now and I look forward to some exciting month.

Pop in from time to time, I’ll write down regulary/irregulary what has happend.